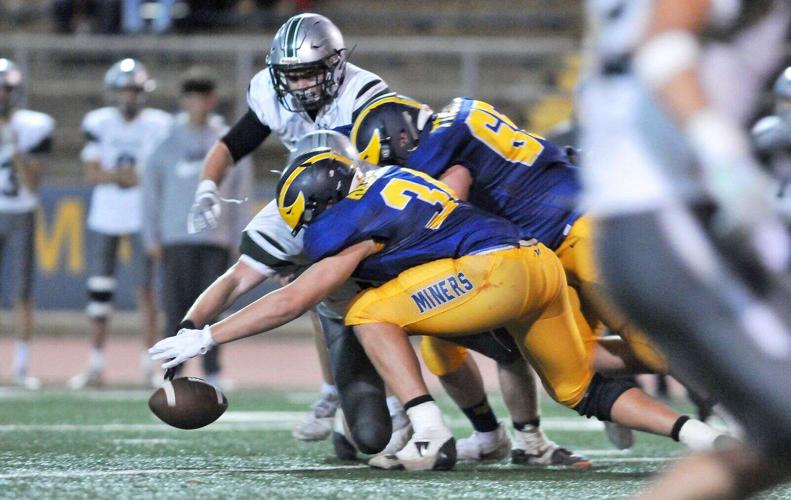 Nevada Union defensive lineman Clay Renner and Brayden Dearman force a Ponderosa Bruins fumble and jump on the ball to take possession for the Miners during a fourth-quarter comeback that ended in triple overtime Friday night at Hooper Stadium. 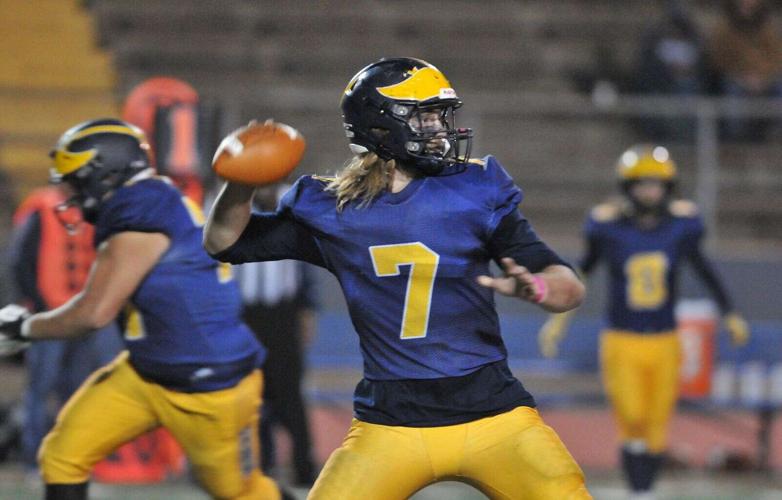 Nevada Union on Friday will kick off the postseason when it faces off with Will C. Wood in the first round of the Sac-Joaquin Section Division IV playoffs. 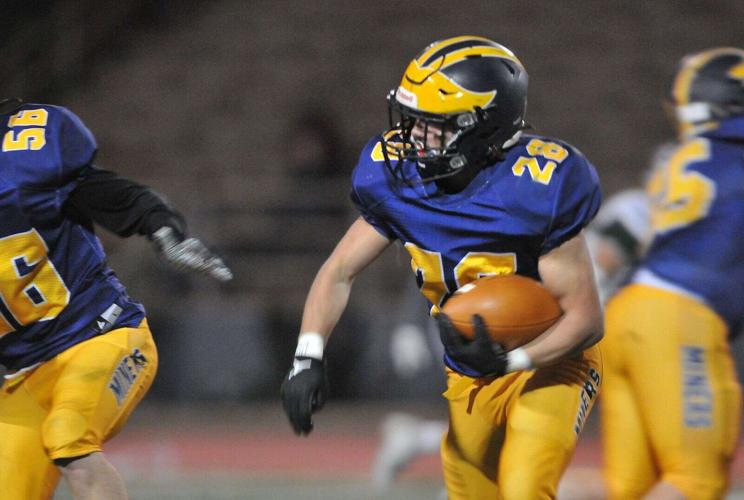 After Friday night’s thrilling come-from-behind overtime victory, it looks like the Miners may have found their magic once again.

“They’re a dedicated group of kids. They are what NU used to be, Miner Magic,” Nevada Union football head coach Brad Sparks said after his team rallied from a 21-point, third-quarter deficit to beat league foe Ponderosa, 50-42, in triple overtime. “And the thing is, there really isn’t any magic, it’s really just all about effort and believing in each other… I’m really proud of our kids.”

Despite trailing 35-14 in the third quarter, the Miners never doubted the game was theirs for the taking on Senior Night at Hooper Stadium.

“I told everyone we were winning at halftime, I didn’t care what the score was, we were winning,” said NU’s senior quarterback Gabe Baker. “There was no doubt in any of our minds the whole game.”

The Miners (6-3 overall, 3-1 Foothill Valley League) began their march to victory late in the third quarter when Baker connected with Andrew Webster for a 25-yard scoring strike to pull to within 14.

Baker would make it a one-score contest just a couple of minutes into the fourth quarter when he bulldozed his way into the end zone from a yard out.

The Miners defense then stepped up and halted a Ponderosa drive deep into NU territory, forcing a turnover on downs with 3:37 left in the fourth quarter.

With the ball on their own 18-yard line, the Miners went to work. Baker spread the ball around as they quickly moved into Ponderosa territory. Baker capped the drive with a 32-yard touchdown pass to senior receiver Brenner Krogh to tie the game at 35-35 with 1:28 left in the fourth.

In overtime, the Miners started with the ball and didn’t waste the opportunity. After a slick 19-yard pass to senior running back Cameron Cormack put the Miners on the 2-yard line, Baker did the rest and plowed into the end zone to give NU a 42-35 edge.

The Bruins then got their shot from the 25-yard line and responded with a score of their own when senior quarterback Ryan Hardt found tight end James Weiss for a 6-yard score.

Nevada Union and Ponderosa both fumbled away their possession in the second overtime stanza, sending the game to a third OT frame.

The Miners once again had the ball first, and quickly got into scoring position thanks to a powerful run by Baker, which put them inside the 5-yard line. After getting stuffed a couple of times, NU handed the ball to Cormack and he charged through the line for the go-ahead touchdown. The Miners then added a two-point conversion run by Baker to go up eight.

With the game on the line, NU’s defense stepped up once again and sealed the game with a tipped-pass interception by Webster.

“I knew we were going to win. I knew we had the intensity and they were tired. I just told everybody to hit someone and do their jobs,” said senior Jedi Vculek, who wrapped up 20 tackles from his middle linebacker position. “(This win) means everything. It’s like my whole football career led up to this right now. I’ve been playing since I was 7 and this is just amazing.”

BAKER AND THE BOYS

Nevada Union’s offense showcased a lot of its weapons Friday night, and needed to do so in order to win.

Baker led the charge, going 25-for-41 for 443 yards, four touchdowns and two interceptions through the air. The 6-foot, 3-inch 240-pound quarterback also ran 20 times for 131 yards and two touchdowns.

Despite giving up 35 points through the first three quarters and 42 overall, the Miners defense stepped up in big moments and made plays in critical junctures all game.

Leading the team in tackles was junior defensive back James Kinney, who wrapped up 21 total tackles and recovered a Ponderosa fumble in the second overtime.

Senior defensive tackle Justin Lopez clogged the middle and tallied 18 total tackles, including a sack. Lopez is also the team’s kicker, and he made all six of his extra point attempts.

Also making a big impact on defense was Renner, who notched 12 tackles, a sack and a fumble recovery. Bodey Eelkema added 12 tackles. Sophomore Cole McCracken made his presence known with nine tackles and a forced fumble.

In the secondary, Webster and Ethan Billock both had interceptions in key spots. Billock picked off Ponderosa late in the fourth quarter to help send the game to overtime, and Webster’s interception sealed the game.

“I’ve been coaching for 30-plus years, and I’ve never seen a team that has so much courage,” said NU defensive coordinator Damon Turner when addressing the team after the game. “When things were looking crappy, you guys stepped up and made plays. You guys have the most character I’ve seen in a team in a long time.”

With the win, the Miners have likely assured themselves an at-large bid to the postseason, and now have a shot at grabbing a share of the Foothill Valley League title.

The Miners head to Lincoln next week to face the FVL leading Fighting Zebras (6-2, 4-0 FVL), who cruised past Rio Linda, 59-0, Friday night.

The bout between the Miners and the Fighting Zebras is scheduled to kickoff at 7 p.m. Thursday at Lincoln High School.