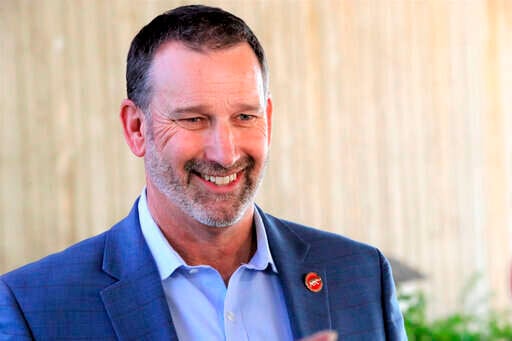 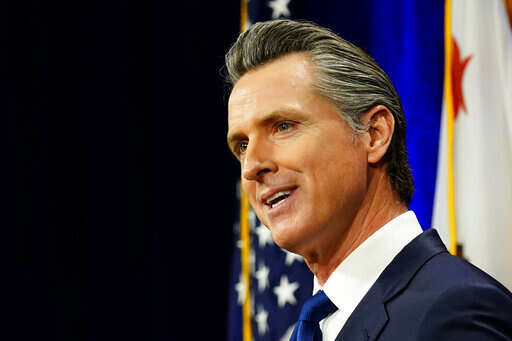 Gov. Gavin Newsom delivers his annual State of the State address in Sacramento last week. Six months after beating back a recall election that could have removed him from office, Newsom appears headed into a less risky reelection for a second, four-year- term. 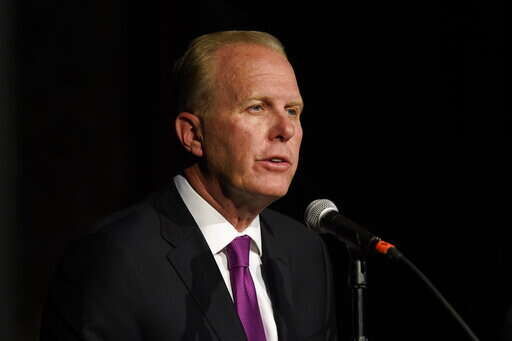 FILE — Former San Diego Mayor Kevin Faulconer responds to a question during a debate between candidates for the upcoming California recall election, held by the Sacramento Press Club in Sacramento, Calif., Aug. 17, 2021. Faulconer, a Republican, who finished third in the effort to recall Gov. Gavin Newsom from office, has said the will not run for governor this year. (AP Photo/Rich Pedroncelli, File) 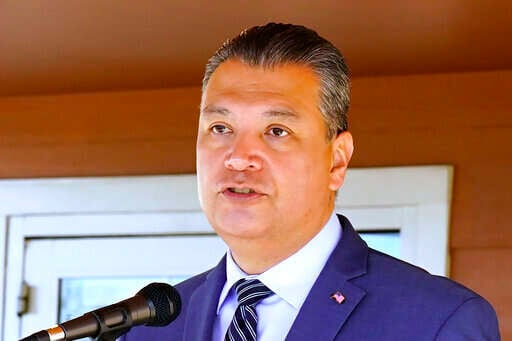 LOS ANGELES — Six months after winning a recall election that could have ousted him from office, Democratic Gov. Gavin Newsom is in an enviable position as he revs up a reelection campaign that could give him a second four-year term.

No top-tier competitor has emerged to stand in his way and he’s flush with campaign cash. He had roughly $25 million in his main political committee at the end of 2021.

All of the most-recognized Republicans who ran in the recall have decided not to run again. They include conservative radio talk show host Larry Elder and former San Diego Mayor Kevin Faulconer, who made his announcement a day before Friday’s deadline for candidates to enter the race.

Newsom discouraged competition with a strong showing in last year’s recall. After appearing imperiled during the depths of the pandemic, he rebounded and defeated by a landslide margin the attempt to push him out. Instead, a field of little-known rivals — including state Sen. Brian Dahle, whose district includes Nevada County — will take on the incumbent in a June 7 primary election.

Newsom’s campaign bankroll at an early stage, paired with the power of incumbency and the state’s prominent Democratic tilt, goes a long way to ward off Republicans who might want the job.

In a statement, Faulconer said he wanted to run this year because the state is on the wrong track, but “the lingering effects of the circus that unfolded toward the end of last year’s recall make it extremely difficult to relaunch the type of campaign I would want to run.” Faulconer finished with 8% of the vote among possible replacement candidates in the recall, far behind Elder.

There are still risks for Newsom: Inflation is soaring, gas prices have hit record levels, a homeless crisis continues to spread and crime rates are climbing.

Claremont McKenna College political scientist Jack Pitney suggested that Newsom be wary of complacency. Fickle voters could turn on him during uncertain times.

“Even if the challenger in November isn’t very compelling or strong, a lot of people will vote for that person to express their displeasure with the incumbent. And there might be a lot of displeasure this November,” Pitney said.

A certified list of candidates is not due from state election officials until later this month, but Newsom’s challengers are expected to include Dahle, a little-known Republican from rural Northern California. Dahle has called it a David vs. Goliath matchup.

Democratic candidates hold commanding advantages in liberal-leaning California. The party holds every statewide office, and dominates in the Legislature and congressional delegation. The party also holds a roughly 2-to-1 advantage in voter registration over Republicans.

Newsom campaign spokesman Dan Newman expressed confidence. “Again and again, voters have overwhelmingly backed the governor,” he said, but added, “He never takes anything for granted.”

Another Democratic candidate who appears unlikely to face a marquee-name competitor: U.S. Sen Alex Padilla, who was appointed by Newsom to fill the seat vacated by Kamala Harris when she became vice president. Republicans who are raising money for the contest include Mark Meuser, who was trounced by Padilla in a run for secretary of state in 2018.

The Republican Party has been withering away in California for years: statewide GOP registration has slipped under 24%, compared to 46.7% for Democrats. Most of the remainder are independents who tend to lean Democratic. In the last two U.S. Senate races, the November ballot included only Democratic candidates after no GOP candidates finished second to earn a place in the general election.

The lack of competitive GOP candidates at the top of the ticket could hurt candidates down the ballot, including those in a string of competitive U.S. House races that are expected to play into the fight to control Congress.

Republican consultant Tim Rosales predicted that inflation, energy independence and the Russian invasion of Ukraine would be influencing voters in House races, in the absence of well-known Republican candidates.

“This year, rather than a candidate at the top of the tickets … issues will be top of mind for voters,” he said.