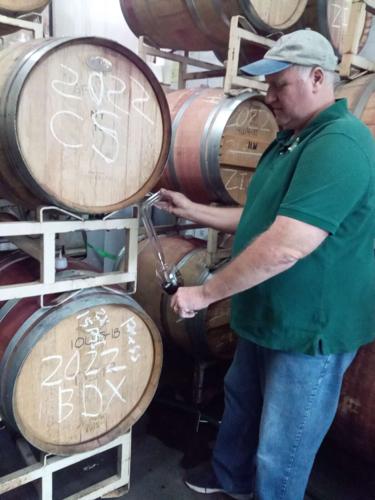 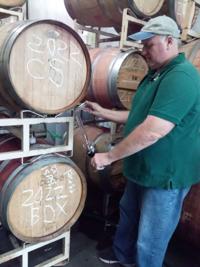 Hal Hanifl took over winemaking duties for Nevada City Winery in 2021. One year later how was that part of things going, I wondered? 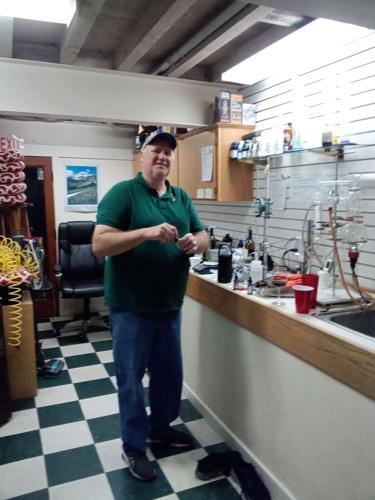 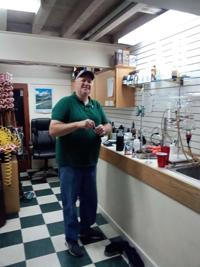 Hal Hanifl comes from a career of working for big wineries. 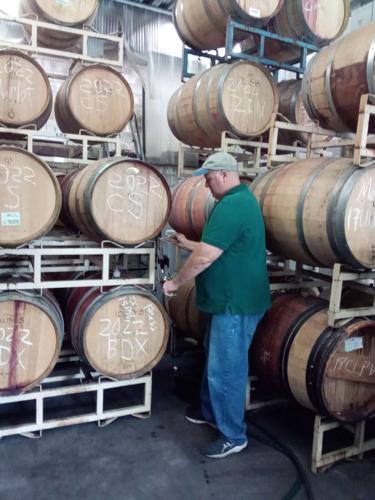 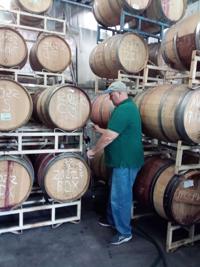 That’s a crazy thing about winemaking. It can easily be a couple of years, or longer, before releasing a red wine.

Susie Bavo took control of the company a few years ago and that part of things has been very stable. Kim Crevoiserat took over managerial control shortly after that and that helped to stabilize what might have been described as a wobbly path.

On top of that long-time winemaker Mark Foster retired after the 2021 crush. Hal Hanifl took over winemaking duties. One year later how was that part of things going, I wondered?

I met up with Hal on the deck overlooking the crush pad. “The best thing? That’s easy,” he answered. “It’s meeting our customers, especially Wine Club members, learning what they like and being able to talk wine with them.”

Hanifl comes from a career of working for big wineries. As a winemaker he was buried deep in the cellar. “A cog in one of many wheels,” is how he described it. “Now I’m the top and the bottom of the department. If it is going to get done, it will be me doing it.”

What he wanted was not just to be in the cellar but also to be able to meet customers and talk wine in the tasting room. Hal thinks of himself as a teacher as much as he considers himself a winemaker. It’s all about communication is what he would say.

That is what the Nevada City Winery wanted as well. Last year, they conducted a fairly extensive search looking for their next winemaker. They wanted someone who would be hands-on, and not afraid to get involved whether it was working in the cellar or working in the Tasting Room.

Clearly the number one job is in the cellar. That alone is an interesting element. When you take over an existing operation usually you also take over the inventory. It has value. You can’t just throw it away. But wine is not like books, or clothing, or furniture. Wine is not inert. It is not done until it is in the bottle and even then it continues to evolve.

So what to do with a cellar full of wine in barrels? That problem was further complicated when they decided to get rid of their off-site case storage building and move everything to the Winery. Overnight the available winemaking space shrunk by half. A lot of barrels with no place to put them.

The bright spot there is that Hal sees blending as a primary component of a winemaker’s job and relishes the opportunity to put wines together in just the right combinations. “More voices make a more complex choir,” he explained. “But at the same time a tiny addition, as little as three percent, can also make a huge difference. It’s about finding balance.”

Be careful what you wish for because one of his first tasks was consolidating wine from those barrels into bigger tanks to free up space for case storage. I’m will be interested to see the results of that. They have some ideas of what they are going to do but I promised not to say anything.

That’s a crazy thing about winemaking. It can easily be a couple of years, or longer, before releasing a red wine. Hal was not there for last year’s crush but had control of the wines post-fermentation. He had a finishing hand in the 2021 Sangiovese Rosé and 2021 Barbera both of which are in the tasting room now. Still we might not see his first crushed reds for a while.

Here’s something else I will be watching for. Hal will tell you his favorite wines are aromatic and fruity whites, typically from cool-climate regions. Not exactly in the Sierra Foothill’s wheelhouse where reds and dry whites dominate. I will be curious how he integrates all that.

One thing that remains unchanged is Nevada City Winery’s tasting room. It remains the best place to meet someone for a glass of wine in the afternoon. In beautiful weather the deck is a lovely space. In inclement weather the tasting room is cozy, and equally delightful.

It was Kim Crevoiserat who answered that one. Wine cocktails appeal to a younger crowd, she explained. Having just spent a week with some twenty-something nephews, I never once saw them drink a glass of chardonnay or cabernet. There was peanut butter-flavored bourbon and fruit-flavored wine coolers.

Whatever, I thought at the time. But I now realize the best cabernet in the world would not have brought them into a winery tasting room. So maybe char-tinis are the ticket. That was what we used to say about white-zinfandel back in the day; a stepping stone to other wines.

Wine in Nevada County has taken a hit over the last several years. We desperately need Nevada City Winery to remain the beacon of wine it has been for the last forty years. And like I said, still a great place to meet for a glass, especially if you want to talk to the winemaker.

Rod Byers, CWE, is a Certified Wine Educator and wine writer as well as a California State Certified Wine Judge. He is the host of the local television show Wine Talk. He can be reached at rodbyers@pinehillwineworks.com or 530-802-7172.

A Look at Some Wines For the Holidays

How does that joke go? It’s a tough job but somebody has to do it. I spent some time visiting a few of our local tasting rooms to make some suggestions about wines for your Holiday table and parties. Not only is there a nice range of varietals, styles, and flavors available, there is a lot of delicious wine. Too many to recommend. Besides, you might not like what I like. What follows are my observations.

The 2019 Cristallo, 2020 Selvatico and 2017 Due Fiori express the essence of Avanguardia as well as any three wines could. The fact that you would not even know the color of those wines simply by reading their names captures the magic of this place. All produced from unusual white grape varieties, they are stylistically quite similar; very dry, with lower alcohol levels, tight fruit, and crisp acidity while still being different from each other. In order, Cristallo is light as summer rain, Selvatico is medium-bodied and Due Fiori offers that hard to find full-bodied white without oak.

Here the focus is classic Bordeaux varieties that offer a range of expressive flavors and individual varietal character. The 2019 Merlot is a classic; soft yet full, fruit-driven, beautiful balance. It is why we love Merlot, even if we say we don’t. The Cabernet-focused 2019 Pennridge Bordeaux Blend is superb and the big boys, the 2019 Cabernet Sauvignon and 2019 Petit Verdot are just hitting their strides. Solid, lovely+, well-made wines that are delicious now but will also age gracefully. If I were going to cellar any Nevada County wines, I would start here. As good as they are, they are going to get even better.

Here the focus is on Italian varietals. Stylistically they offer an old-world, more structured approach to winemaking while still delivering a wide range of flavor profiles, textures, and weights. The 2019 Negroamaro and 2019 Mark’s Magia got my attention for their aromatic, delicious fruit-driven character. I would have sworn one of them was a Zinfandel. I will let you figure out which one. The 2019 Nero D’Avola is an homage to the rustic life. The 2018 Teroldego is a big boy, swinging for the the fences. Perhaps the best of the lot is the 2017 Sinistra offering complex flavors and subtle nuances of a perfectly aged wine at its peak.

It is too early to find the new winemaker’s finger prints on many wines but if the two wines in the tasting room he has had his hands on are an indication, we will look forward to more. The 2021 Sangiovese Rosé hits that wonderful sweet spot between fruitiness and crisp acidity. The 2021 Barbera is beautifully expressive, youthful and fruit-driven. For a bold, robust red, try the 2015 Petite Sirah. The 2016 Reserve Cabernet harks back to a traditional winemaking style and offers superb varietal character and flavors at their apex.

First of all, everything in the line-up from top to bottom is delicious, but also different from each other. Nowhere is that more evident than in their two Zinfandels. The 2019 Old Clone is as good and as varietally-correct as any 100% Zinfandel wine you can find in California. The 2018 Phil’s Selection with a bit of Petite Sirah shows an equally delicious but different and more contemporary style. If you like Chardonnay, theirs is easily the best around. If Barbera is your thing and you like bling, the 2020 Barbera was just crowned best of the Sierra Foothills and deserves it.

If you prefer full-bodied red wines that have had time to age and soften, this is your place. Two years in barrel, another one or two in bottle before release is the common practice. The 2016 Petite Sirah, a combination of black fruits and softened tannins retains its varietal character without being bruising. The 2015 Vizir and 2016 VSR are two more examples of nicely evolved wines. Let someone else do the aging for you. That way all you have to do is enjoy the results. On that note, the 2018 Late Harvest Zinfandel with a bit of residual sugar is really fun.